Unfortunately, the best moment of Biden’s day (for me) happened after the briefing, which took place aboard Air Force One en route to Fort Myers, Florida. So, we’ll need to wait for tomorrow’s briefing to see if the hot mic makes the Q&A – looking at you, Doocy.

Florida, Listen to Me Very Clearly: It’s a trap! Run!
The monologue portion of the White House briefing was all hurricanes, with both WH Press Secretary Karine Jean-Pierre and FEMA Director Deanne Criswell hard selling the “federal family,” to the apparent delight of reporters. KJP shared that:

"Nearly 4,000 federal personnel are on the ground now providing emergency power to hospitals, serving millions of meals and evaluating the structural safety of buildings. We're committed to helping the state of Florida build back stronger and more resilient, and we will be there for them each step of the way.”

Criswell piled on and spoke about how the “federal family” – her words – is expanding their hooks and influence in the Sunshine State:

“We opened our first Disaster Recovery Center yesterday, and we’re going to open three more tomorrow.  We’re going to continue to open these centers around the state, and the other parts of the state as well that have been impacted… And today’s — or the one that’s in Lee County is also co-located with the state’s insurance village.

So, individuals can go talk to their insurance company, then they can come see what they’re eligible for with FEMA. The SBA will also be there; they can find out if they’re going to need a — or want – a loan, as well as other nonprofit and non-governmental organizations, to help meet some of those initial needs.”

Is it just me? She continued, “We’re going to continue to move in resources and support as we start the rebuilding efforts.”

Never Let A Crisis Go To Waste
Don’t mistake my concern for the liberty of my former state with a lack of empathy for those impacted by the hurricane. My parents suffered minor impacts from this hurricane, and I lived through Hurricane Charlie and supported the recovery from the devastation in Port Charlotte and Punta Gorda. I absolutely empathize.

I’m just asking everyone to pause and consider the implications of allowing the Biden Administration to take advantage of this crisis and move in the “federal family.”

Florida is one of our last hopes for freedom.

Q: Residents on the ground are saying that they’re waiting hours-long delays for FEMA assistance.  What are you doing to bring down those times?

A:  Yeah, so I did just get a report of a place in Charlotte County where there’s long lines. That’s an insurance village where the state has set up and we have sent personnel to co-locate them.  It’s not one of our disaster recovery centers yet. We are surging more people in there right now, as it turns out that there’s a lot of people that went to this location.” 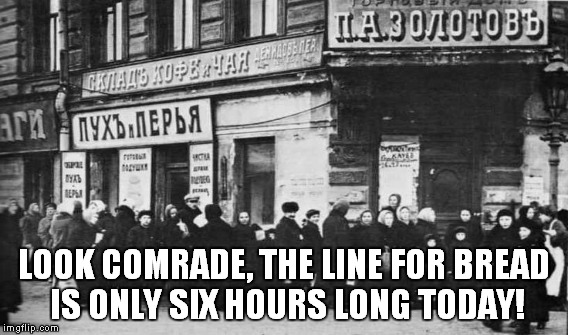 “You know, it's funny, sometimes American journalists talk about how bad the country is because people are lining up for food. That's a good thing.” - Bernie Sanders

At the end of the line, there’s bread (maybe). We may not be there yet as a nation, but give them time.

One journalist may have had the same thought when she asked: “Deanne, now that the disaster declaration has been extended another 30 days, do you have an estimate of how much this is going to cost the federal government?”

Criswell shared that, “It’s going to be in the billions. How many billions? I don’t know yet.  But it will certainly be in the billions and perhaps one of the more costly disasters that we’ve seen in many years.”

No One F*cks With A Biden!
Joe Bidened again today and said the quiet part out loud on a hot mic, which was then reported by TMZ. As KJP mentioned during the gaggle:

It was the meeting with Ft. Myers Mayor Ray Murphy that made headlines Wednesday afternoon. Murphy can be heard thanking Biden for coming, and the muddled audio sounds like Biden asked the mayor some variation of “you were concerned about me coming down here,” to which Murphy replied, “I was, I was.”

“No one f*cks with a Biden,” Biden told Murphy while shaking his hand, and the mayor laughed and responded, “Yeah, you’re g**damn right.”

According to Yahoo! News, Biden then said, “You can’t argue with reporters outside the house.”

Spoiler: That’s not what he said.

TMZ confirms that Biden actually says, "You can't argue with your brother outside the house." Murphy replies, "That's exactly right."

TMZ theorizes, “It seems -- SEEMS -- they may be talking about the fact Biden and DeSantis -- who could end up going head-to-head in 2024 -- shared the stage and came together to deal with the disaster, but we don't know.”

In that scenario, Biden and DeSantis are quarreling brothers who need to make the family look good in the public eye.

Federal family, indeed. The kind that will go to the mattresses when the cameras aren’t rolling.

We’re Finally Talking About OPEC+
After days of refusing to comment on the OPEC+ decision to reduce output, KJP finally got her talking points and referred people to a statement from Jake Sullivan (who, side note, appears to be running everything over in the Executive Branch).

As result, it appears that she misspoke yesterday when she said, “we’re not going to be considering new releases” from the Strategic Petroleum Reserves at this time. Today she said, “And the President will continue to direct SPR releases as necessary.”

What a difference a day makes.

“Finally, today’s announcement is a reminder of why it is so critical that the United States reduce its reliance on foreign sources of fossil fuels. With the passage of the Inflation Reduction Act, the U.S. is now poised to make the most significant investment ever in accelerating the clean energy transition while increasing energy security, by increasing our reliance on American-made and American-produced clean energy and energy technologies.”

We are all building back better, and we are reducing our reliance on foreign fossil fuels by investing in clean energy. Never let a crisis go to waste.

KJP also made the bold claim that the Saudis are aligning with the Russians during a back and forth with one reporte. When asked if the Saudi’s are a trustworthy partner, KJP gave a garbled response before stating, “Look, it’s clear that OPEC+ is aligning with, with Russia with today’s announcement.”

That seems like a legitimate statement for someone trying to destabilize the region.

In Case You Missed It: Biden Admin Gave Iranian Protestors Internet
There was no material update on further Iranian sanctions, just more promises that something would be announced this week, but KJP wanted to make sure to remind everyone, again, that “We’re making it easier for Iranians to access the Internet, including through facility greater — facilitating greater access to secure outside platforms and services.”

She mentions the internet every time she is asked about Iran. It’s the answer in absence of any real answer. She went on to say that, “We’re also holding accountable Iranian officials and entities, such as the Morality Police that are responsible for employing violence to suppress civil society,” but it’s unclear what she means by “accountable” aside from strongly worded statements.

America: Welcome Your Adopted Sibling Cuba to the Federal Family
While the “federal family” is literally covering the full cost of hurricane damage for Puerto Rico, Florida, and possibly the Carolinas, they are also considering adopting Cuba:

“Our hearts go out to the Cuban — to Cuban people at this difficult time.  And so, the U.S. continues to communicate with the government of Cuba regarding the evolving humanitarian and environmental consequences of both the hurricane — Hurricane Ian and also the August 5th fire in the area.  We are evaluating ways in which we can continue to help the Cuban people, consistent with the U.S. laws and regulations…I would refer you to the State Department.

The “federal family” is here to nurture and mother all those impacted by the storms. It’s gonna be billions, and you may need to wait in some lines. But at the end of the line, there may be bread.

Final thought: Remember,while you all are lining up down there, the winner of the federal family’s bread is you.

The Biden Laptop Investigation is about Joe, not Hunter #Impeach46