Congress has been subpoenaing Lois Lerner’s emails literally for over a year. At every turn, the IRS has said there’s nothing they could do.

They claim that the emails are unrecoverable or that it simply would have taken too long for the administration to fully comply with the subpoena.

The Obama administration’s appointee, John Koskinen, has gone before Congress multiple times and done everything he could to stonewall the investigation. They claimed they couldn’t find the emails.

Well, guess what: when IRS investigators began digging, they found out that the IRS NEVER even tried to comply with the subpoenas and find the emails! Not at all! Many of the Lois Lerner emails were found on back-up tapes, which the IRS never even looked through.

Here’s another fun fact. According to an affidavit, the lead investigator that the IRS put in charge of finding Lois Lerner’s emails is blind.

Don’t believe us? Check out paragraph 14 of the affidavit.

Across the board, the IRS has deliberately tried to delay the investigation. Now, the IRS watchdog group has announced it is treating this as a criminal matter!

Tell Congress to arrest these IRS criminal bureaucrats once and for all!

If this wasn’t so serious, it would be comical how the IRS is just completely disregarding this Congressional investigation.

Of the many Lois Lerner emails that have been recovered and processed so far, this one is the most striking: 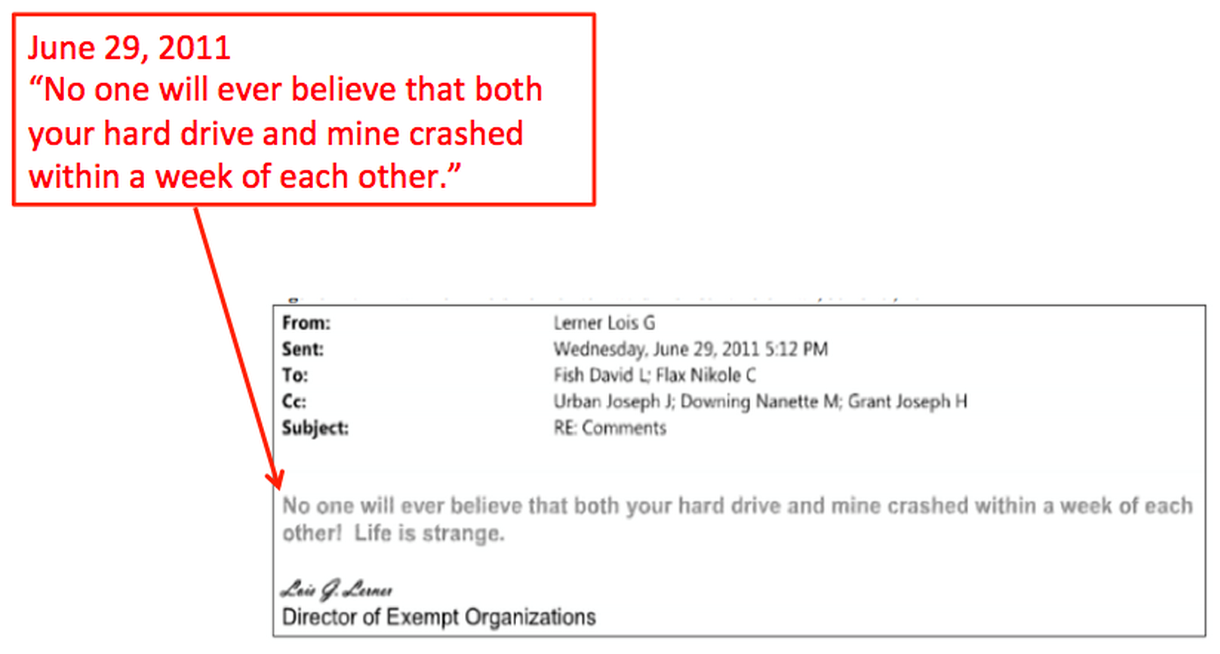 Yes, that is Lois Lerner telling one of her colleagues that “no one will ever believe that both your hard drive and mine crashed within a week of each other.”

This is an email that we were never supposed to see. The IRS deliberately withheld emails like this.

On countless occasions, IRS officials came before Congress and told them that the emails were simply gone… that there was nothing they could do.

It took an independent watchdog a matter of just WEEKS to locate the back-up tapes and decipher their contents.

But they didn’t just uncover the emails. They also are looking into criminal wrongdoing.

That’s right… Criminal charges against all those involved at the IRS; all those responsible for hiding the truth from us.

I want them dragged out of the IRS building in handcuffs, but as long as Eric Holder (or Loretta Lynch) is Attorney General that will never happen.

Only Congress can stop this lawless administration once and for all!

Congress has the power to arrest Lois Lerner. The emails show her gloating with her colleagues over her “hard drive” crash. Throw her in the Capitol Jail and throw away the key until she agrees to testify!

Congress has the power to arrest the IRS bureaucrats. The IG has proven that they lied to Congress when they claimed the emails were unrecoverable. Throw them in the Capitol Jail until they implicate who ordered them to lie!

Call it a smoking gun if you will. The fact remains that we now have PROOF that the law was broken and Congress was lied to.

It is up to YOU to demand that Congress step up and arrest these IRS criminals!

Joe Biden Is Selling Us to the New World Order

Biden's Border Crisis is About to Get MUCH Worse!

The Impending Death of Democracy at the WHO Health Summit