This article was originally published on FreeStateColorado.com
10/17/22
Join the Community

In this deep dive, Brandon Wark exposes the deep ties and sick agenda of Colorado Secretary of State Jena Griswold.

Jena Griswold isn't just Colorado's problem. The youngest Secretary of State in the US, Griswold also serves the head of the National Association of Secretaries of State. That's one of the reasons we consider Colorado the Election Fraud Test Kitchen -- what happens here spreads. Brandon provides a well-sourced view of just how terrifying that kind of power is in the hands of Secretary Griswold.

Brandon Wark is a Colorado native, world traveler, political operative, and blogger in defense of liberty. Brandon's work can be found at freestatecolorado.com.

Colorado voters have suffered under Jena Griswold’s tenure as Secretary of State.

Both in 2016 and 2020, concerns were raised by Coloradoans about the legitimacy of major elections

And how did Jena Griswold alleviate these concerns? 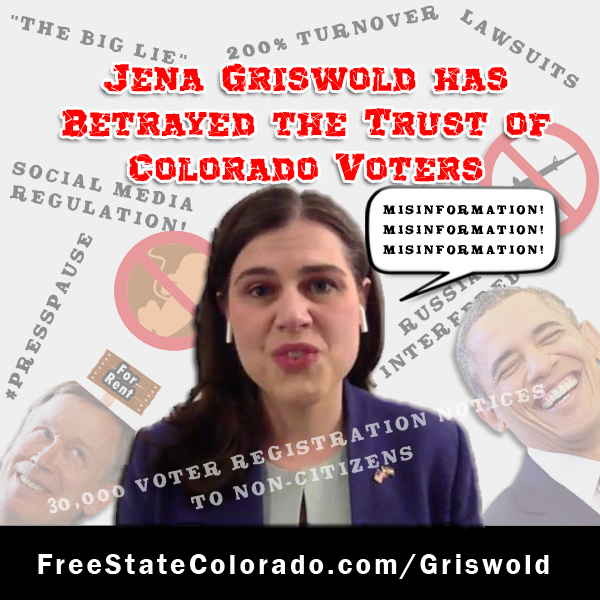 With hyper-partisan attacks on her political opponents, the press, and Colorado voters.

Griswold has not only failed to alleviate voters concerns, but has lowered Coloradoan’s trust in the electoral system.

So, how has Griswold betrayed the trust of Colorado voters?

I will be sharing some of her exploits below.

But first, let’s ask, “who is Jena Griswold?”

Griswold has a career in politics, which explains why she seems so detached from the life of the average individual.

This explains her support from Blueflower Action, and other DC connected Big Money.

Take a look at her LinkedIn profile:

Griswold’s biography on her current website doesn’t give a lot of specifics on her work experience, but an older archived version of her biography reveals some interesting details:

Griswold’s 2019 campaign website says she, “began working on our elections as a voter protection attorney for President Obama.“

For four months during the 2012 election, in a Deputy Director position, lawyer Griswold was tasked with protecting Democratic campaigns for an Obama organization.

Griswold then brought this experience to Colorado Governor John Hickenlooper’s Washington DC office for the State of Colorado, where she served as a Director.

All those years in DC politics, with Hickenlooper, DeGette, and OFA staff, set her up well for her 2018 campaign.

In the contest for Secretary of State, Democratic newcomer Jena Griswold has raised more than $1 million, compared with $301,000 for GOP incumbent Wayne Williams. Griswold’s cash is more than both candidates raised in each of the last two secretary of state’s contests.

Griswold must be pleasing the right people, because she has raised nearly $4 million for her 2022 re-election campaign.

Here is the TRACER reporting:

Here are some of her recent big donors:

Eric Sondermann, a regular reporter for Colorado Politics and The Gazette, was kicked out of an event that Griswold’s campaign was hosting after writing an article critical of her.

Griswold’s anti-press attitude may have contributed to the left-leaning Denver Post’s endorsement of her opponent!

The Denver Pest admitted that “Colorado deserves better,” and that Griswold “is completely dismissive of ours, and anyone else’s valid questions and concerns about election integrity.”

Now that we’ve explored some of Griswold’s background, let’s see how she used her position as Colorado Secretary of State.

Leading up the contentious 2020 Presidential election, many voters were worried about the potential for election night irregularities.

Remember, most of the country was going to use mail-in ballots for the first time, and Covid restrictions were still in place.

So what did Griswold do to assure Colorado voters the election was going to be conducted fairly and accurately?

What could be more suspicious and insulting to voters than a politician telling journalists to not report?!

Griswold’s bizarre request to the press caused many people to wonder who she was actually working for.

The son and daughter-in-law of billionaire social justice advocate George Soros supported Griswold with thousands over the past two election cycles.

This includes a $10,000 contribution to Blueflower Action.

When Democrats took over the US Congress in 2021, they got to work attacking their competition.

HR 1 federalized elections, and made it more difficult for Third Party Presidential candidates to qualify for matching funds.

This bill helped secure future elections for Democrats, and stifled others.

And of course Griswold supported it.

Asking Non-Citizens to Register to Vote

And now in 2022, Griswold’s office was caught sending 30,000 voter registration postcards to non-citizens!

Griswold’s claims that Colorado is the “Gold Standard” of election integrity appears more foolish than ever!

Concerns over the accuracy of 2020 elections led to Elbert and Douglas County Clerks to sue Secretary of State Griswold so they could examine election data.

Griswold does not appear to be interested in hearing the concerns of county clerks, and instead worked to dispel the lawsuit.

According to political reporter John Frank:

All told, Griswold has spent more than $4.3 million in federal and state funding since 2020 on such commercials, documents reviewed by Axios Denver show.

The Gazette also reported in October 2021:

Colorado Secretary of State Jena Griswold sent $2.8 million in federal emergency COVID-19 mitigation funds — almost half of the CARES Act cash allocated to her office — to a politically well-connected, Washington D.C.-based public relations and lobbying firm to produce a set of TV ads to educate Colorado voters about the 2020 election procedures.

Almost half of the $6.6 million spent by her office went to The Glover Parker Group, a Washington D.C.-based lobbying and PR firm, to produce TV ads to promote voting in the 2020 election. Although an initial no-bid contract was penned in August 2020 for $1.8 million, additions and changes to the contract over the next few months led to a total of $2.8 million directed to the firm.

Clearly Griswold’s priority is to promote herself and send money to Democrat-connected DC organizations.

After the tragedy in Boulder in 2021, Griswold wasted no time exploiting the deaths to push her anti-gun agenda on national media:

Griswold may be one of the worst examples in recent history of a Colorado politician using their position to push a partisan agenda.

Do you believe that if Republicans win the next election, they will take away your right to vote?

Jenna Griswold wants you to think so.

Just a few months ago, she claimed that you should expect that Republicans running for office will “strip Americans of the right to vote,” if elected.

Not only that, but Griswold also advocated for a boycott of Alabama because she disagrees with their laws on abortion:

Griswold is willing to disparage Colorado voters who might not trust her by using extreme language.

“The Big Lie” seems to be one of Griswold’s top campaign slogans, and it’s no mistake that she wants to compare concerned Colroadoans with fascists.

Griswold’s use of the term is extremely insensitive.

By comparing Colorado citizens who question the integrity of elections, with Adolph Hitler, Griswold is making a bold statement.

Apparently, Griswold is using her position not to represent Coloradoans, but to enforce an extreme political agenda.

No wonder her office has contributed to the widespread concern over Colorado’s election integrity.

Failure to Clean Up Voter Rolls

In October of 2020, Judicial Watch sued the Secretary of State, and the State of Colorado for failure to clean up voter roles.

Some of the issues that Judicial was suing over are as follows:

With all this controversy, it’s no surprise that Griswold’s office is having a difficult time keeping employees.

Massive Turnover at the SOS Office

According to Colorado Peak Politics, Griswold’s office hit 200% turnover between her taking the office in 2019, and early 2021.

Was Griswold chasing out qualified employees to replace them with partisan hacks?

Or was it just her lack of leadership and poor management that caused individuals to flee her office?

Jimmy Sengenberger, in a Denver Gazette article points out that this turnover is unusual:

Prior to the 2020 election, Griswold, like many of her Colorado Democratic colleagues parroted the talking points that “Russia interfered in our elections.”

Of course, Griswold’s concerns over the 2016 election, is at odds with her assurances that the 2020 elections were without interference.

Griswold testifed to Congress on October 6th, 2020 advocating for new national legislation to “combat deep fakes, election misinformation, and foreign coordination,” and “to act to remove the artificial protections afforded to social media companies by section 230…and third party content posted on their sites can promote ill-intentioned foreign activity, they should no longer be shielded from accountability.”

If you can stomach it, you can watch Griswold’s testimony from October 2020.

In early 2021, Griswold was caught by the Colorado Sun, “undermining the nonpartisan staff in the enforcement division to target her perceived political opponents,” according to Colorado Peak Politics.

In at least two instances, the office’s Campaign Finance Enforcement team recommended dismissing complaints but the deputy secretary of state reversed the recommendations.

Griswold’s review of campaign finance enforcement decisions before they were issued contrasts with her vows to keep the process in the hands of her nonpartisan staff.

“Please work to get time in my schedule for my review,” Griswold wrote to Ian Rayder, the former deputy secretary of state, in a Jan. 5 email. “Ian, please review first.”

Griswold has little in common with the average Coloradoan, and represents the worst traits of career politicians.

Griswold has no problem advocating for restrictions on social media companies, and telling journalists to not promote on election results until she gives them the okay.

Griswold has used her elected position to push for restrictions on our right to defend ourselves with a firearm, and as a platform to push for social issues that have nothing to do with her position.

The real danger to our Democracy are politicians like Griswold.