Every day, the Conservative Daily audience sends a Daily Dose of Reality to elected and appointed officials in the Executive and Legislative branches of the US federal government. To join us and send this letter to your elected officials, click here.

“I vote yes under duress. I found out today that I have no choice but to vote aye or I’ll be arrested. I don’t think that is what our founders had in mind when they used the democratic process to elect our leaders and form a self government. I find that very disheartening.” - Mohave County Board of Supervisors Chairman Ron Gould

"I will vote to certify this canvass under duress for the chaos Maricopa County has foisted into our election process." Mohave County Supervisor Hildy Angius

“Let me be clear, if any Arizona County fails to follow the law and to timely certify the election results, they will be sued. The Board members in Mohave should go ask their buddies in Cochise about how that worked out for them.” - Radical Leftist Activist Attorney Marc Elias 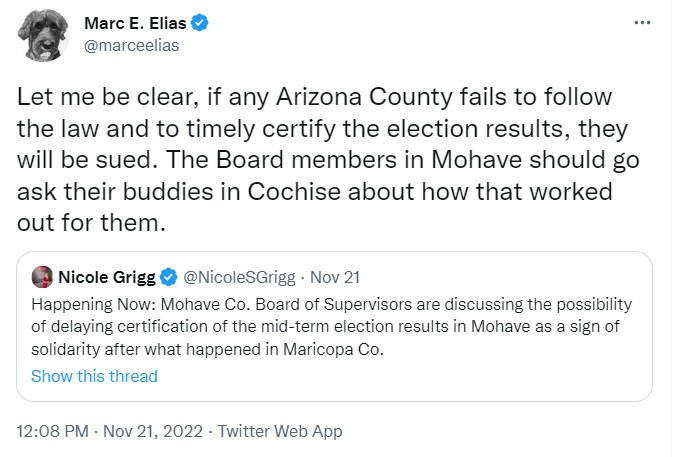 County Commissioners in Arizona are being openly intimidated by the full weight and power of the US government. Activist Democrat Attorney Marc Elias has been busy, intimidating, threatening, and committing widespread election lawfare across the nation.

On his twitter, Elias claims that County Commissioners have no real authority. That certifying election results “mandatory, not discretionary: the Board ‘must canvass’ the election results.”

So, Congress, what do you think?

If the County leadership has no real authority over elections, that means that the state, specifically the Secretary of State with a so-called check by the Attorney General in many states, has full power and authority. In the past two years, we have seen an accelerated attempt to centralize election oversight and certification at the state executive level.

But then, many states are pushing for radical resolutions such as federal HR1 or the National Popular Vote Compact -- which make state election oversight as ceremonial as Elias and his radical leftist pals claim that County election oversight is today. Soon, elections will be a solely national affair, Constitution be damned.

What part of your oath to preserve, protect, and defend the natural rights do you not understand?

DEMAND FOR REMEDY: Investigate the actions of Marc Elias/Elias Law, Perkins Coie, and other radical leftist, activist law firms for intimidating local officials and obstructing county business in our elections.

Allowing the lawfare, racketeering, and influence operations to continue against the people violates your oath. You may think we don’t know. You may think these exposures will go away. You make think your radical leftist law firms can protect you. You are wrong.

The exposure has happened. Justice is coming. Remember your oath.

SEND THIS LETTER TO CONGRESS

Unconstitutional! Why does the FBI need such a massive new campus?

Hey, Congress: What's the Deal with the Chinese Spy Balloon?

Congress: Stop the Expansion of the FBI Immediately