“In line with the principle of ‘political tasks first and economic benefits of enterprises second,’ our company has perfected and formed the whole set of election management theory and software tools in line with China's national conditions…We hope to ride on the spring breeze of political reform and provide you with election consulting services and election campaign management in line with China's national conditions based on our democratic election campaigns with Chinese characteristics.”

Prior to his arrest, Eugene Yu ran Konnech Inc., a U.S. election company, out of East Lansing, Michigan. Kanekoa also gave us his bio: “Yu, who graduated from Zhejiang University in 1982 before receiving his MBA from Wake Forest University in 1988, founded Michigan’s Konnech Inc. on March 20, 2002, registering the domain www.konnech.com one month later.”

What is the Impact of Yu Being a Chinese Asset?
The arrest of Yu has led activists for free and fair elections to dig into the company and its connections, and determine the impact of a Chinese asset running a US election’s company.

That leads me to today’s stunning revelations.

On Sunday, a small Telegram channel entitled “SwampKiller” posted an infrastructure diagram with the text, “The following is a (partial) list of domains that all share the same IP address, which also shows up on a network tied to Chinese servers. Both 2dmeeting.cn AND pollchief.com were registered by Eugene Yu, the CEO of Konnech.”

2dmeeting.cn previously had an IP address of 75.75.210.242. Take Note: This is the IP address of a US server that the Chinese have access to through their .cn domain names.

This led several Colorado activists to discover that the list of entities that shared the IP 75.75.210.242 included Colorado election worker sites in Douglas, Jefferson, and Denver counties (at least - it’s a partial list).

Poll worker sites included in these counties were pointing to a Chinese server.

To be clear, they aren’t currently pointing to this Chinese server. They stopped doing that right after the 2020 election:

Why did these election sites stop pointing to the questionable server after the 2020 election?

But Colorado Doesn’t Use Konnech!
Konnech is not officially a part of Colorado elections infrastructure. In fact, a search for either “Konnech” or “PollChief” – the Konnech election logistics application that is used in several Colorado counties – on the Colorado Secretary of State’s website only returns the 2013 RFI response from Konnech. There is zero current guidance or documentation on this application used in Colorado elections.

That’s weird, because Secretary Jena Griswold is notorious in her centralization of power and control over Colorado elections. In fact, she spent the past two legislative sessions stripping counties of their elections power in favor of centralization.

But this application used in Colorado elections, which was pointing to Chinese servers, escaped her oversight?

To Make Matters Worse…
The Colorado counties are scrambling to come up with a narrative, but their first attempt is not great: 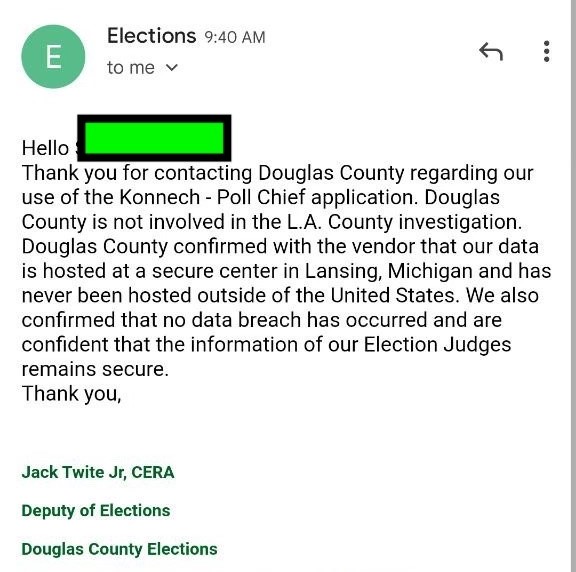 My favorite part is where he says they “confirmed with the vendor” whose CEO was just arrested. Not exactly the most credible source.

I called both Douglas County and Secretary of State for comment, and I explicitly said in my request that the “vendor” is not credible since the CEO was just arrested for being a Chinese asset.

I received this response from Wendy Manitta Holmes, Director of Communications and Public Affairs for Douglas County Government:

Forget the fact that the county is relying on the vendor and, at this point in an investigation, there is no way they could know that.

Forget it, because the DNS history of their own PollChief site debunks that answer.

This story is developing. If you’re caught up on Kanekoa but you want even more about Konnech, check out Gus Quixote. This goes deep.